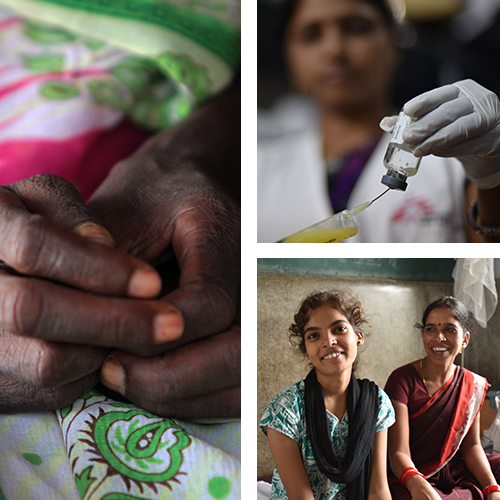 Bihar has 80 per cent of the kala azar cases reported in India. After treating more than 13,000 patients since 2007 in Bihar’s Vaishali district, MSF began focusing on the treatment of kala azar-HIV co-infection in partnership with the Rajendra Memorial Research Institute of Medical Sciences (RMRIMS) in Patna in 2016.

As the MSF ward treats patients from all over Bihar, MSF outreach teams raise awareness about kala azar-HIV co-infection and advocate for appropriate testing and referral of patients from other districts with different stakeholders such as private clinics, doctors, medical colleges, district and block level government health staff and organisations working on HIV/AIDS and kala azar prevention across Bihar.

MSF organised district-level workshops in Muzaffarpur, Saran, East Champaran, Darbhanga and Vaishali for stakeholders from the Ministry of Health and post-graduate students in medical colleges. They were trained on the importance of addressing kala azar-HIV co-infection for elimination of kala azar, as well as the process of referring kala azar-HIV cases to MSF’s ward in RMRIMS, Patna.

As part of continued advocacy and technical support, MSF conducted trainings in four kala azar endemic districts of Jharkhand (Dumka, Gudda, Pakud and Sahibganj) to demonstrate the preparation and administration of AmBisome. A presentation on kala azar-HIV co-infection was also made in the same event.

MSF participated in “Bihar Diwas” organised by the district hospital in Siwan, where several health officials were trained on identification and referral of kala azar-HIV co-infected patients.